Get a feel for what wordtune read can do!

Whether you are reading a lengthy blog post, analyzing a report or going through a paper, Wordtune helps you digest what's important. Cut through the word count to find the words that count.

Despite the positive news around private consumption and corporate investments, economic sentiment in the Eurozone is on the decline. The Purchasing Managers’ Index peaked in summer and has been declining since then (figure 2). The composite index marked a five-month low and the manufacturing index a seven-month-low in August (figure 2).
‍
A major contributor to the declining economic sentiment is shortages in materials and upstream products. A combination of rapidly rising demand and reduced production capacities during the pandemic has led to serious shortages that are increasingly holding back industrial production.5 In surveys among German companies, over 70% report that supply shortages hamper their production. In the automotive industry, over 90% suffer from these shortages; in the engineering sector, it is over 80%. This is a historical high. Over the last three decades, the corresponding values never amounted to more than 20%.6 In this sense, interrupted supply chains pose a threat to recovery at a time when industrial orders have surged.

The Eurozone's economy is in a recession. The pandemic caused shortages in materials and upstream products, which threatens economic recovery at a time when orders have surged.

JWST, an enormous $9.7 billion observatory with 18 mirrors coated in gold, is scheduled to launch into space this December. It’s the scientific successor to the Hubble Space Telescope, which completely altered our view of the universe. Scientists around the world are ready to see JWST go; the telescope has been over budget and behind schedule for years. But rather than focusing on that long-awaited triumph, they’re caught up in a controversy over the 20-year-old naming decision.
‍
More than 1,200 people, including professional scientists who have applied for observing time on JWST, have signed an online petition asking NASA to rename the telescope. Webb, critics say, is the wrong namesake for an instrument meant to inspire future generations of scientific thinkers. They point to archival, publicly accessible documents that show that, during his pre-NASA tenure at the State Department in the early ’50s, Webb attended a meeting about policies that discriminated against LGBTQ government employees. Other documents show that NASA, under Webb’s watch, engaged in discriminatory firing.

Scientists around the world eagerly wait for the $9.7 billion JWST to go into orbit, but a controversy has surrounded the telescope's name: more than 1,200 people have signed a petition to rename it, claiming that J. Webb discriminated against LGBTQ employees.

Because it’s these sorts of activities that allow us to become our ideal selves. It’s the perpetual pursuit of fulfilling our ideal selves that grants us happiness, regardless of superficial pleasures or pain, regardless of positive or negative emotions. This is why some people are happy in war and others are sad at weddings. It’s why some are excited to work and others hate parties. The traits they’re inhabiting don’t align with their ideal selves.
‍
The end results don’t define our ideal selves. It’s not finishing the marathon that makes us happy; it’s achieving a difficult long-term goal that does. It’s not having an awesome kid to show off that makes us happy; it’s knowing that you gave yourself up to the growth of another human being that is special. It’s not the prestige and money from the new business that makes you happy, it’s the process of overcoming all odds with people you care about.

It's the pursuit of our ideal selves, and not the end results, that makes us happy - regardless of pleasures or pain, positive or negative emotions.

Lower income countries spend five times more on debt than coping with the impact of climate change and reducing carbon emissions, according to a leading anti poverty charity.
‍
Figures from Jubilee Debt Campaign show that 34 of the world’s poorest countries are spending $29.4bn (£21.4bn) on debt payments a year compared with $5.4bn (£3.9bn) on measures to reduce the impact of the climate emergency.
‍
Uganda said it would spend $537m between 2016 and 2020, including funds from international agencies and donors, on climate related projects to adapt the country’s infrastructure and deal with climate emergencies.
‍
However, the $107.4m annual budget is dwarfed by external debt payments which will total $739m in 2021, rising to $1.35bn in 2025.

The poorest countries, like Uganda, spend five times more on external debt payments than on measures to fight climate change.

Read through the clutter and zoom back into the sections where the details matter most.

When key points are clearly highlighted, you can stay informed without compromising your time.

Summaries help you quickly decipher and understand the meaning of complex texts.

Go beyond plain summaries with

Our advanced AI can summarize the text from different points-of-view, putting the emphasis on topics you're interested in.

Put the spotlight on different keywords and see how the summary changes:

Information overload is a problem that has been affecting decision-makers since the rise of information technology.

Information overload is a problem that has been exacerbated by the rapid increase in the availability of information and the decrease ininformation search-related costs.

Information overload occurs when decision-makers face a level of information that is greater than their information processing capacity.

"It's spot on. I had a very complex medical journal that I had to decipher and Wordtune Read summarized it all perfectly."

"I was struggling to find the motivation to read these long, dense articles. I have reading disabilities and was convinced reading was just
futile for me - until I found Wordtune Read."

"This tool is super cool! Having short summaries alongside the text is very useful because if I find an interesting claim in the paper I almost always want to "dig in" to understand the full evidence that supports the claim."

"Wordtune Read has been helpful for me when I need to quickly summarize content and then share helpful business ideas in emails, blog posts and social media. I haven't found any competing services that come close to it, and it is now indispensable to my workflow." 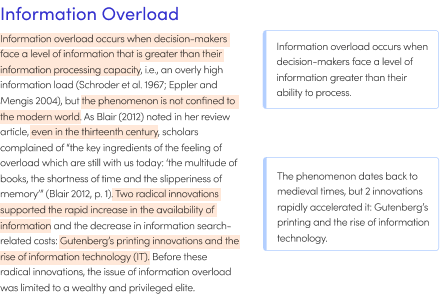 Your time is valuable. Cut through the word count and focus on the words that count.

The Technology Behind Wordtune

Wordtune Read was built by AI21 Labs, founded in 2018 by AI luminaries. Our goal is to revolutionize the way we read and write. We design advanced AI tools and language models that understand the context and semantics of written text. These models are what set Wordtune Read apart as the most sophisticated AI-based reading tool on the market.